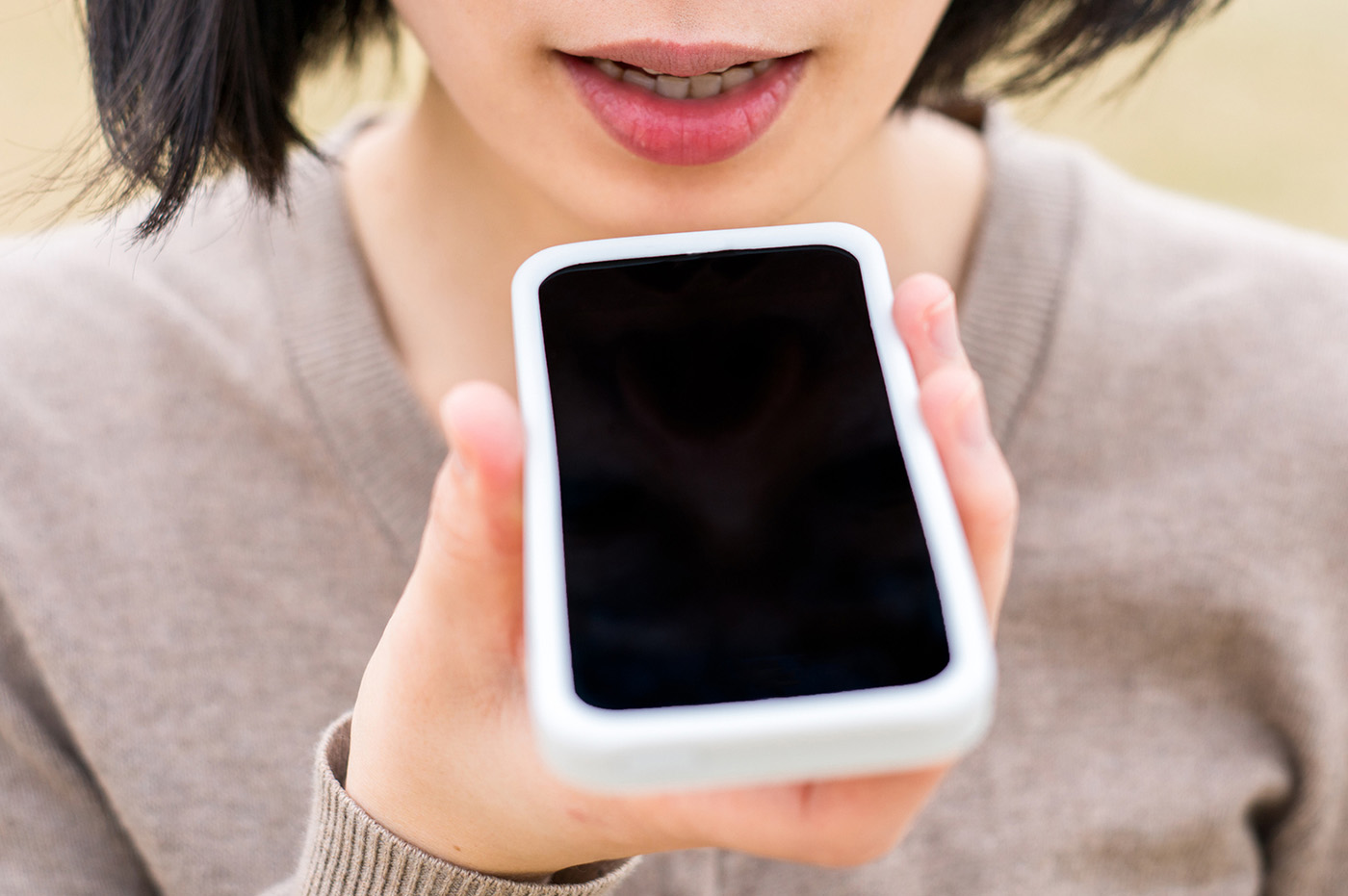 How Comfortable are Real People with Using Voice Commands on Their Devices?

How much do people use voice commands with their devices, and what do they use them for?

So, why do we care? Simple: The voice revolution is coming, perhaps not as fast as everyone originally thought, but it’s coming. In just a few years, you may be spending as much – or more – time interacting with devices that have no screen as you do with devices that have screens, such as laptops and smartphones. Voice has the potential to be a disruptive force in the industry and will, therefore, result in new winners and losers – and you want to be among the winners.

If you’re interested in how these data points have been changing over time, check out these links to the three prior versions of this study:

For many of the survey questions shown as bar charts, we asked participants to answer as follows:

Unless specified otherwise, these charts show the totals of the “Very Likely” and “Likely” responses. We received 1,123 valid responses to our 2020 survey.

In addition, for many of the other survey questions shown as bar charts, we asked participants to answer as follows:

Unless specified otherwise, these charts show the totals of the “Very Frequently” and “Frequently” responses.

How Is Voice Used With Devices Today?

This first section goes into detail on how people use voice commands, or other methods, to do what they want with their devices. Our first question asked users what methods they use to look up information on their smartphones. 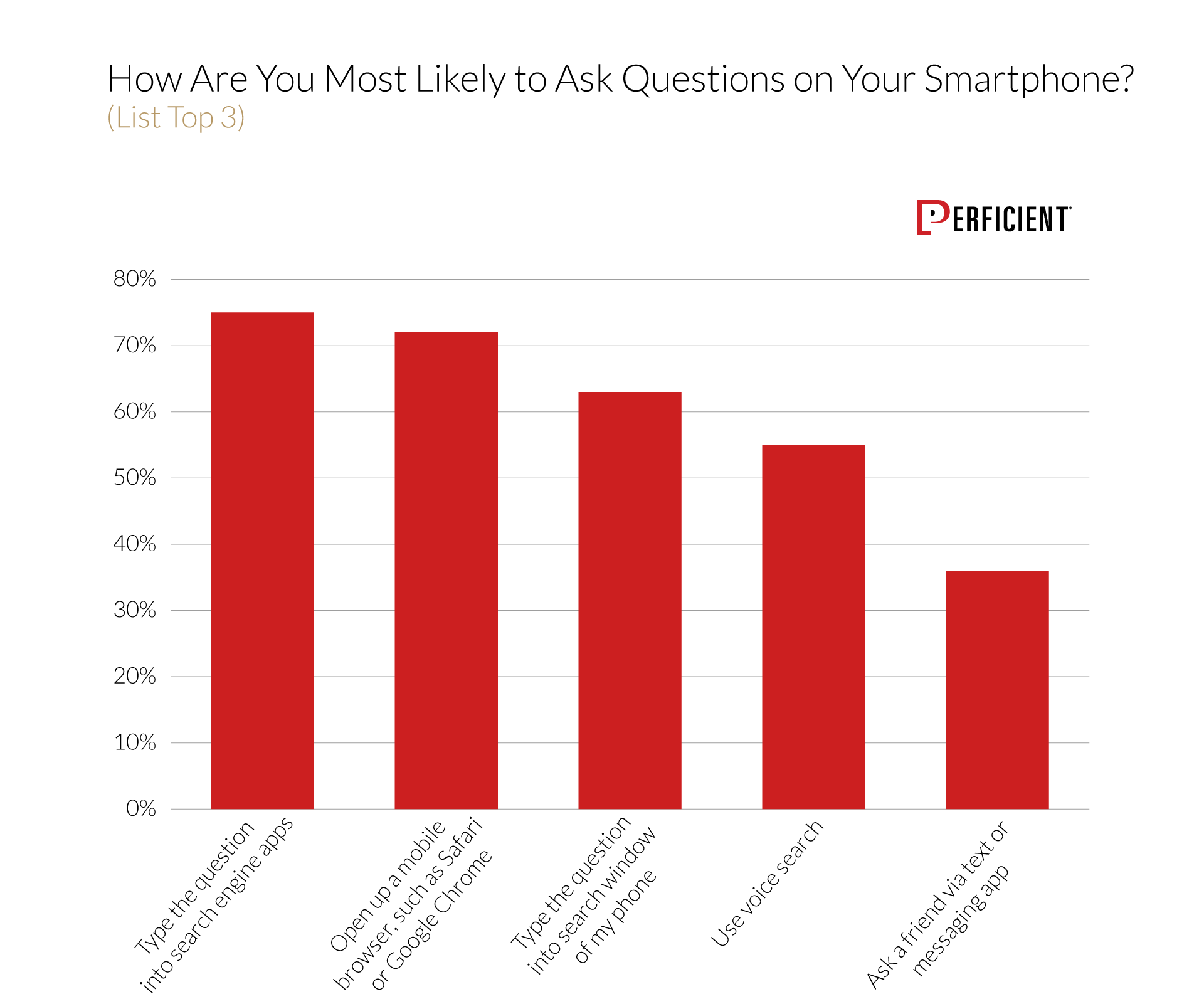 Using voice came in fourth place, behind typing into search engine apps (75%), opening up a browser (72%), and typing into the search window on their phone (63%). Nonetheless, more than half of the respondents (55%) included using voice searches as one of their top three answers.

Our next question asked how often users make use of smart speakers. 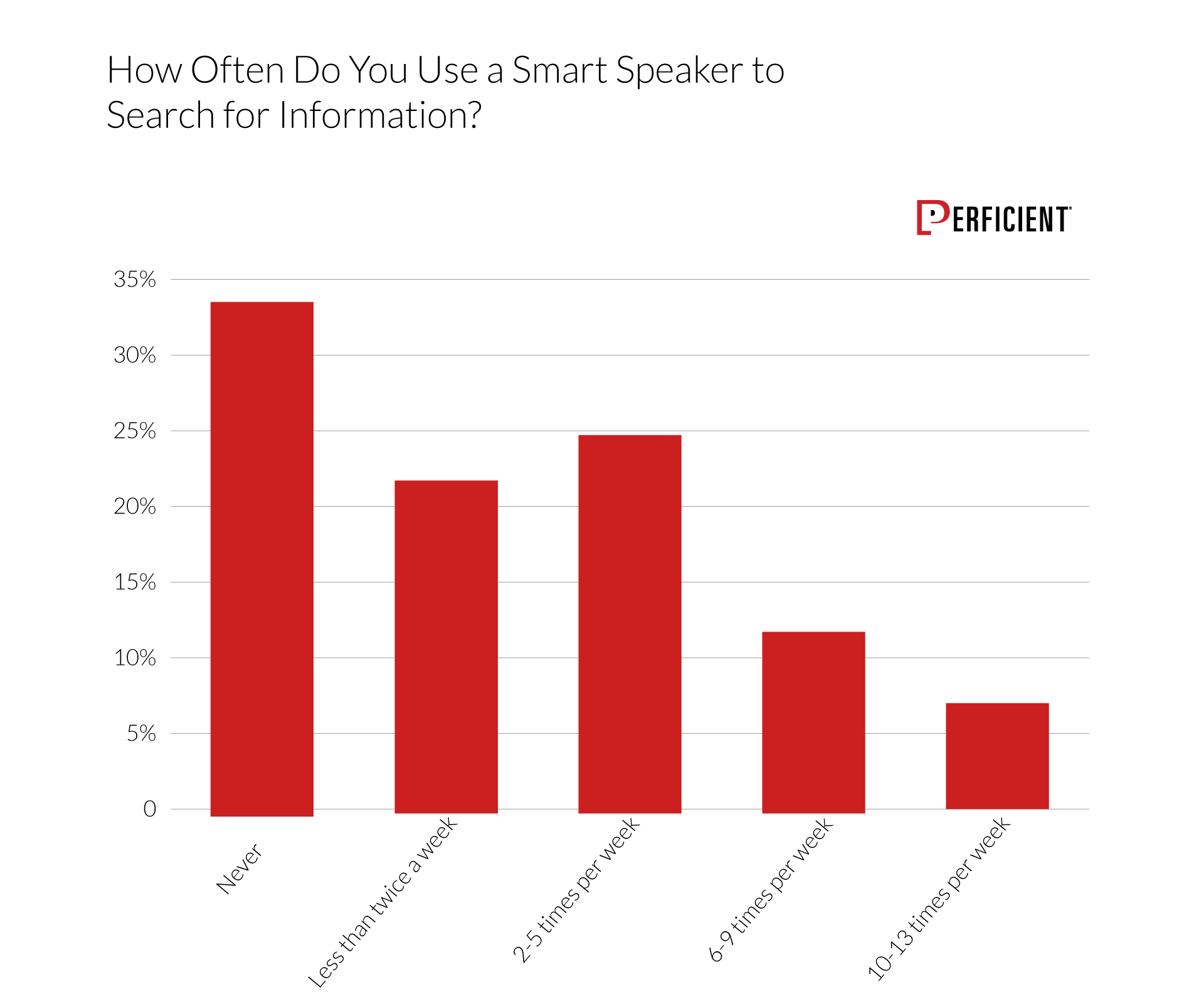 Fewer than 20% of respondents used a smart speaker to search for information more than five times per week. “Never” and “less than twice per week” made up 56% of all responses. Since this indicated that voice usage to replace traditional methods for searching for information has a long way to go, we also wanted to also explore why that may be.

In our next question, we asked users if they get frustrated when their device doesn’t recognize what they’ve said. 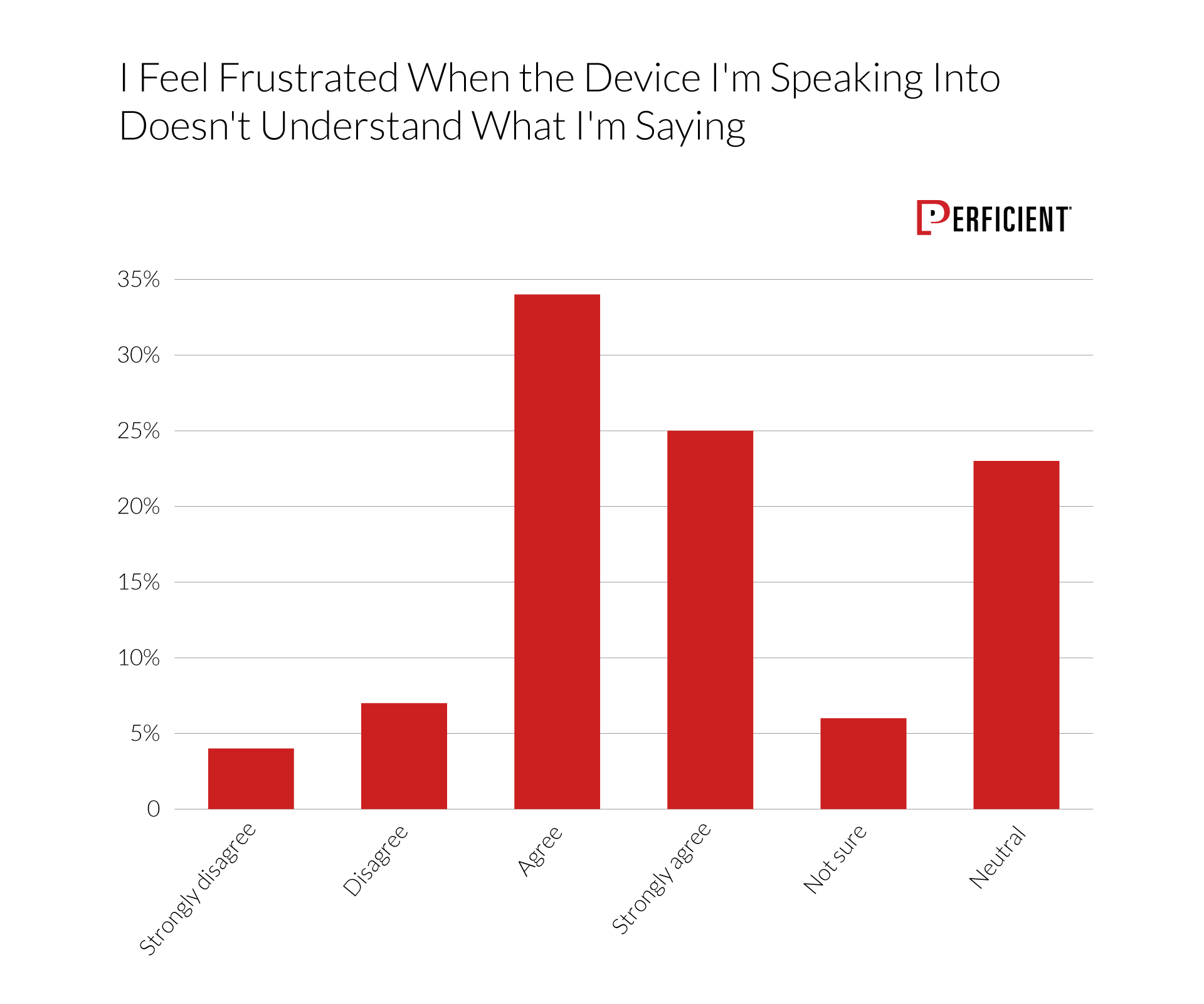 59% of those polled agreed or strongly agreed that this was frustrating. We then asked whether or not the device not understanding them impacted how they used the device. 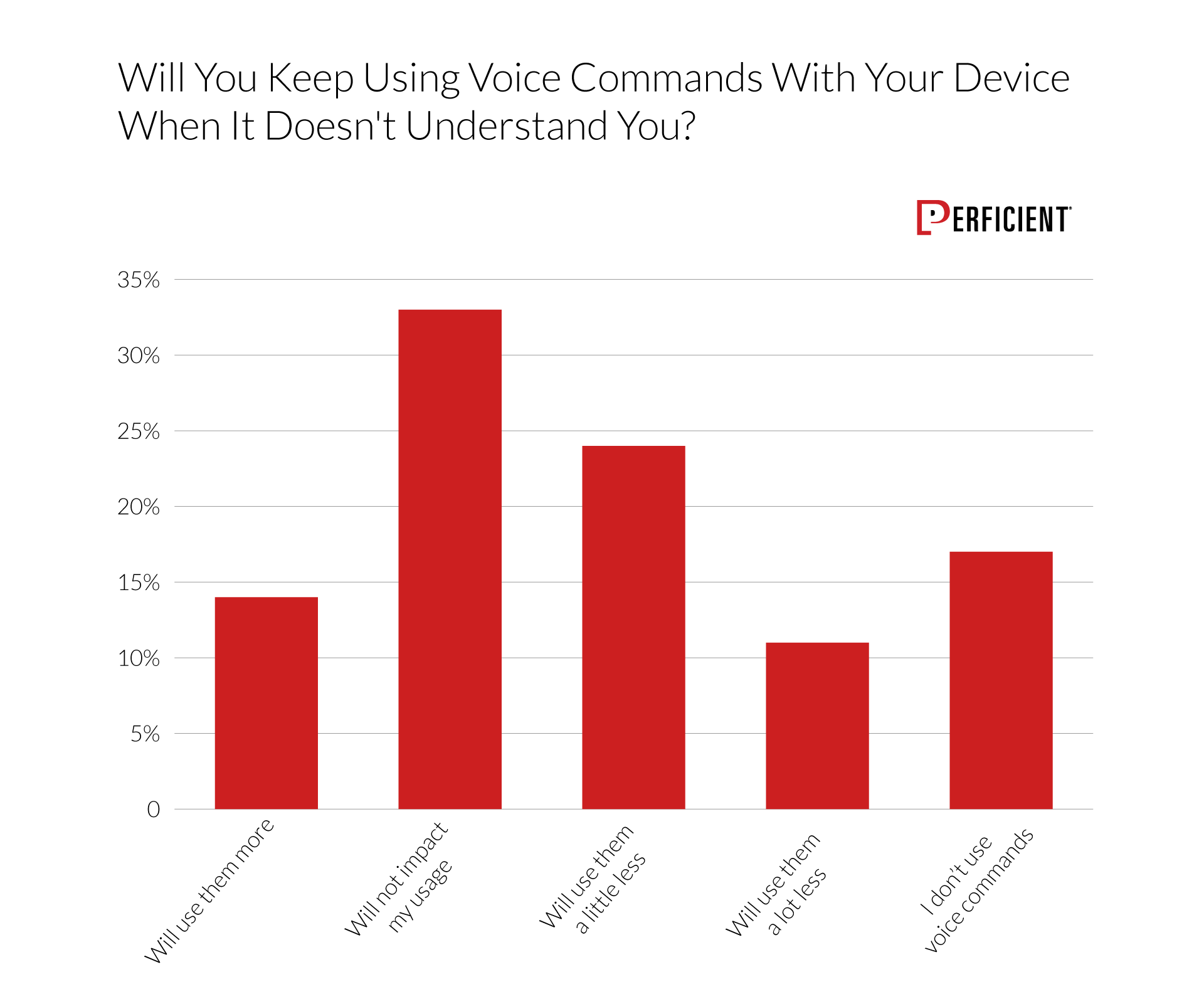 Nearly 36% of respondents said they would use the device less (and 16.9% said that they don’t use voice commands). As a next step, we explored whether getting an incorrect answer would impact their level of usage. 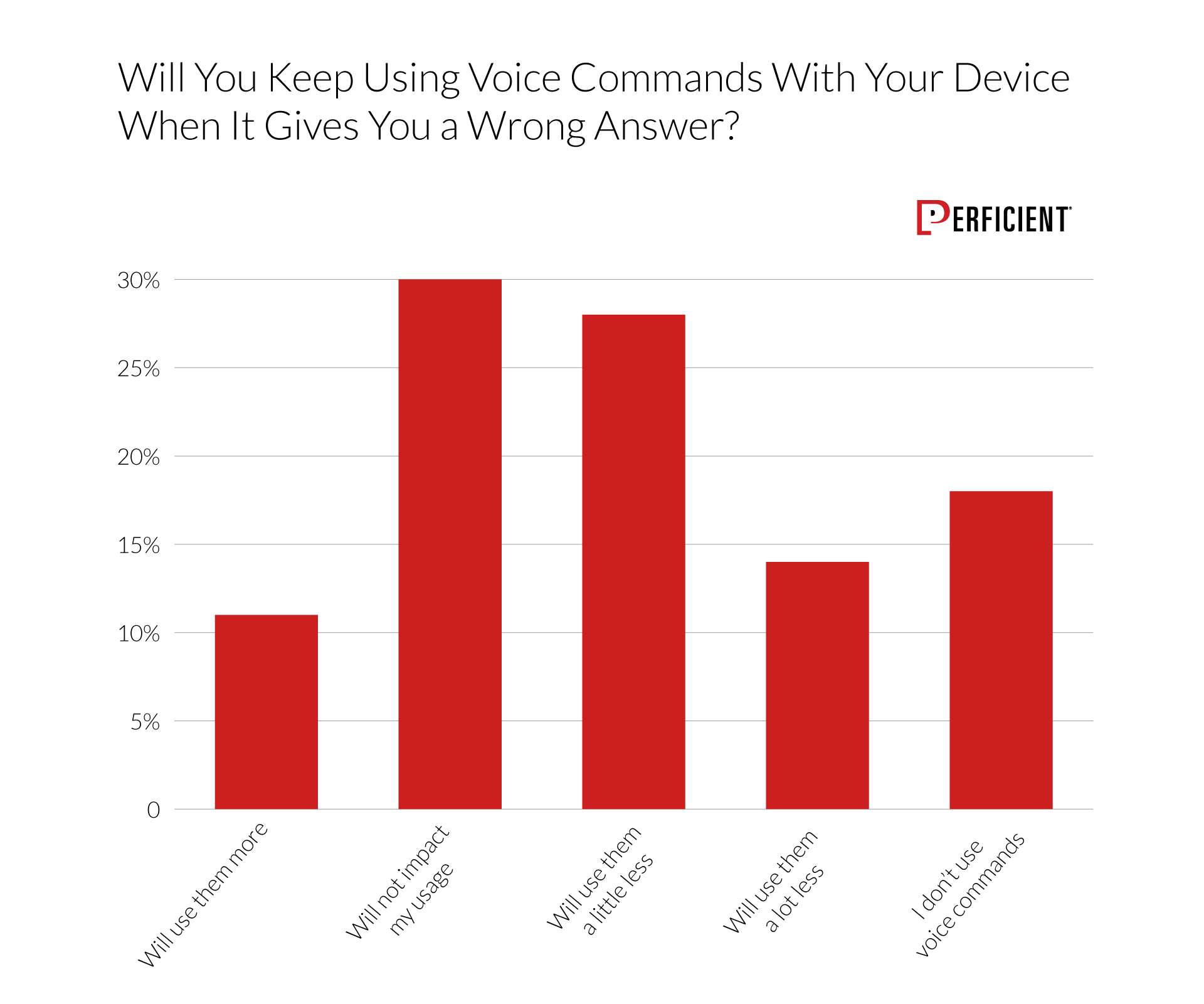 More than 41% replied that incorrect answers will lower their usage. From here, our questions shifted direction a bit, to explore other aspects of how users leverage voice commands with their devices.

The first question in this set explored what devices they use voice commands with the most. 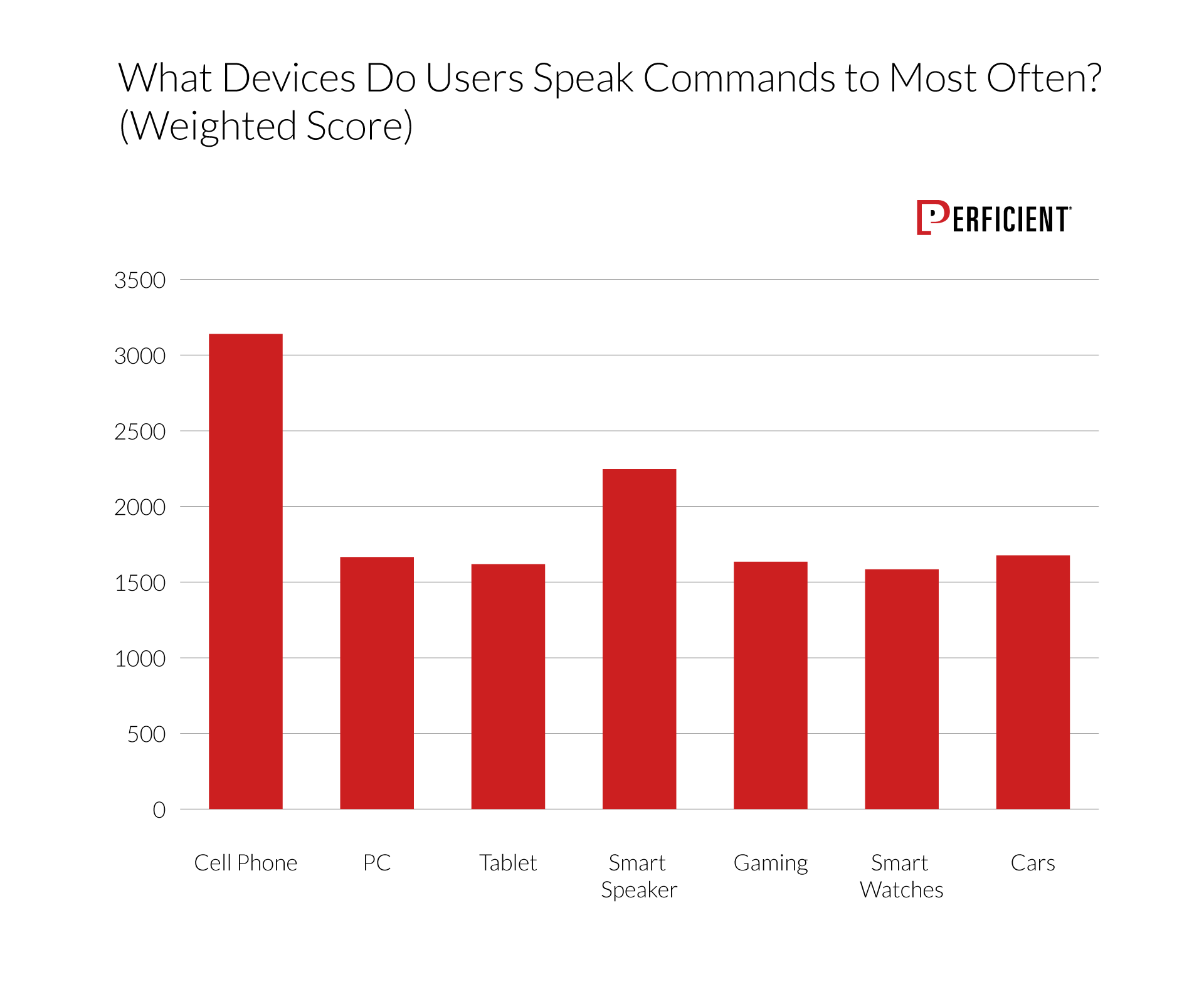 Mobile phones are the most common devices for using voice commands by a wide margin (nearly 40% more than usage with smart speakers). Next, we asked users what would make them likely to use voice commands more. 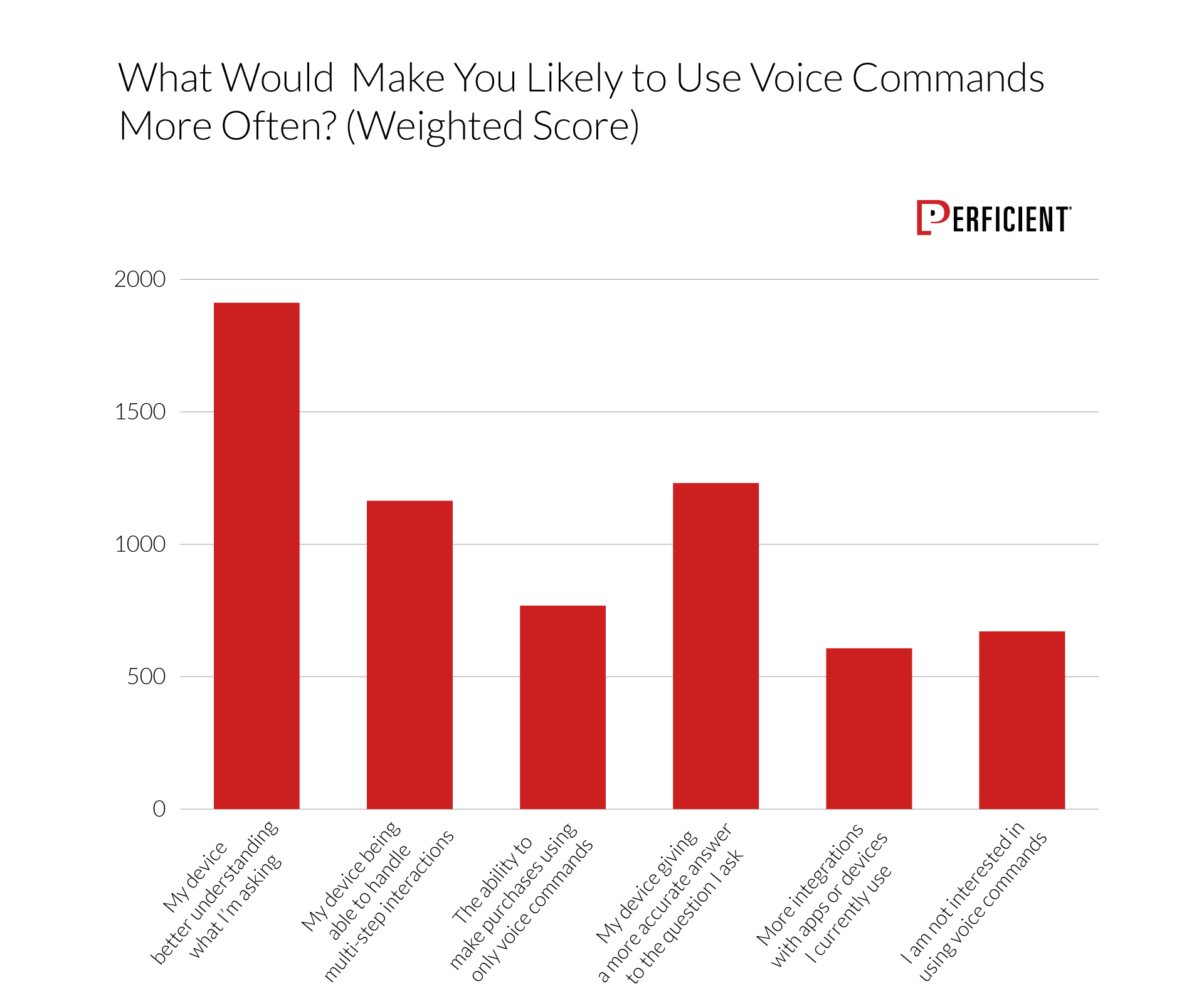 The three most popular choices were, respectively: My device better understanding what I’m asking (1,912 votes); My device giving a more accurate answer to the question I ask (1,231 votes); My device being able to handle multi-step interactions (1,164 votes). These all relate to the device’s capabilities in understanding what you want and/or providing you what you want. These were followed by the ability to make purchases using only voice commands (768 votes).

As in prior years, we asked questions about using voice commands while driving. 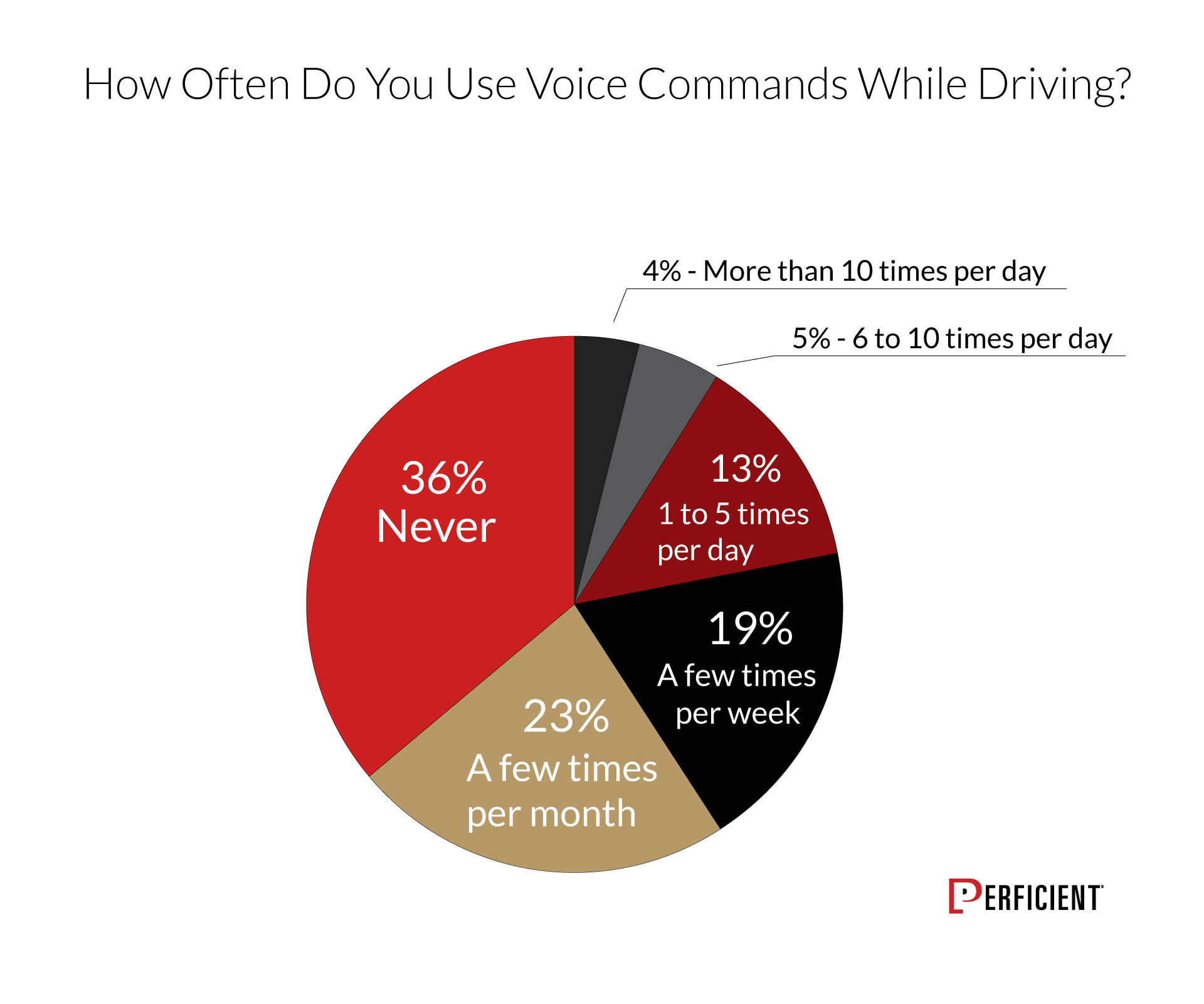 Only 9% of respondents said that they did so more than five times per day, with 42% responding rarely or never. 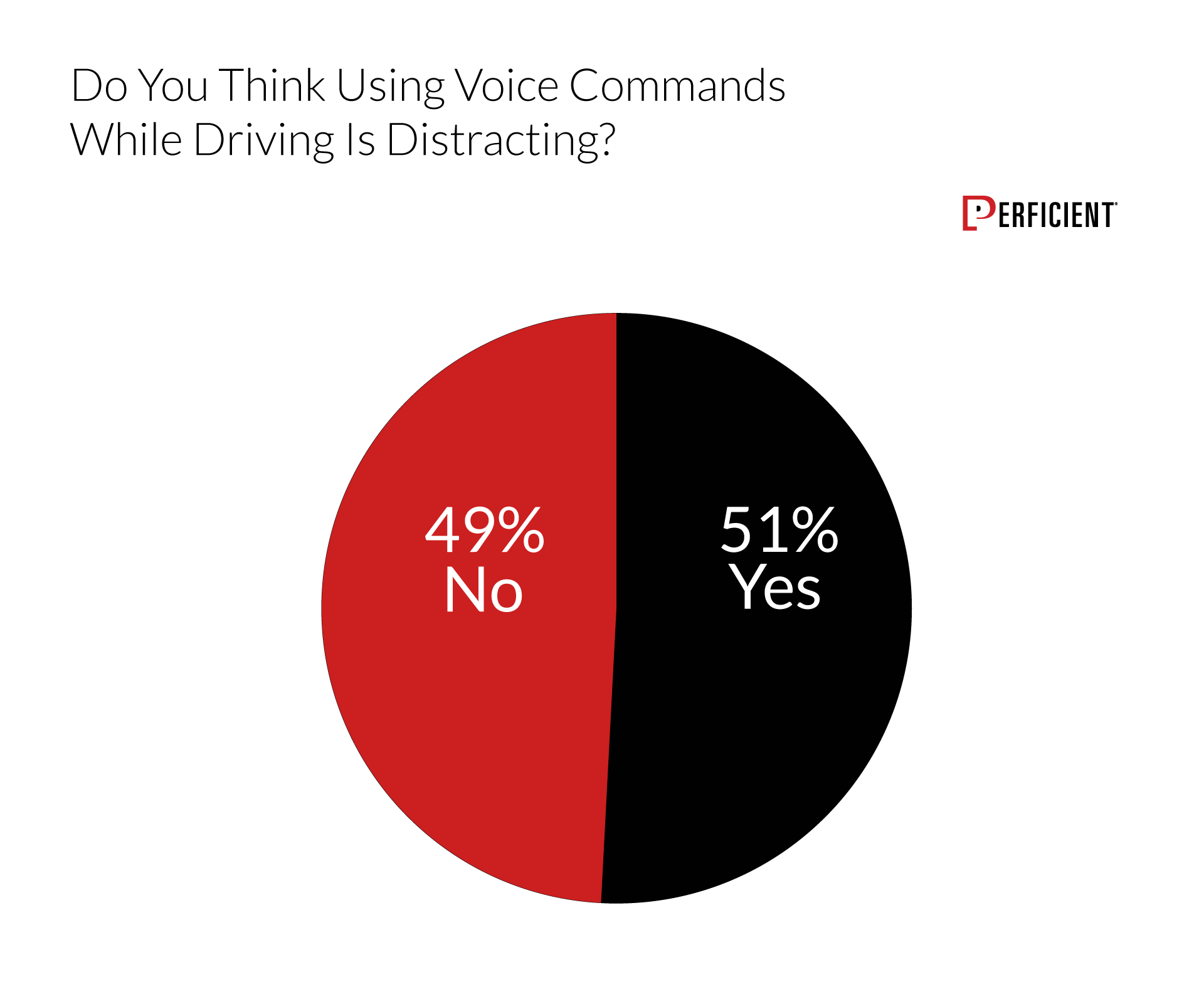 The split here was tight, with 51% responding yes and 49% saying no. Next up, we asked participants how often they used voice commands with devices other than their phones. 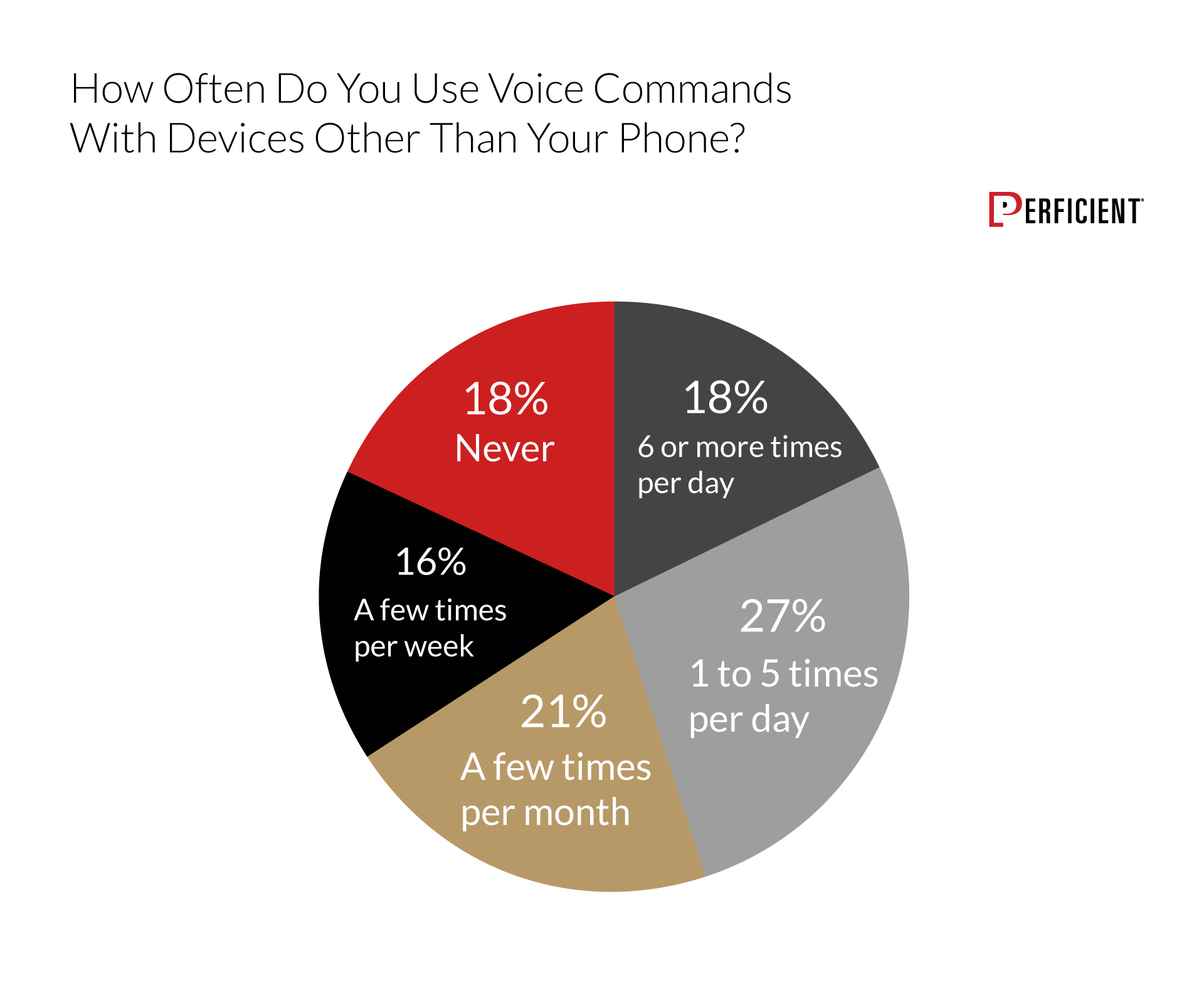 Forty-five percent of respondents use voice commands at least daily, which is higher than we expected. However, this is likely driven by Smart Speaker users. Note that this question was regarding voice commands, not voice searches (so “Alexa set a timer” would be counted here).

We then asked, “What is your preferred method of sending a text message?” 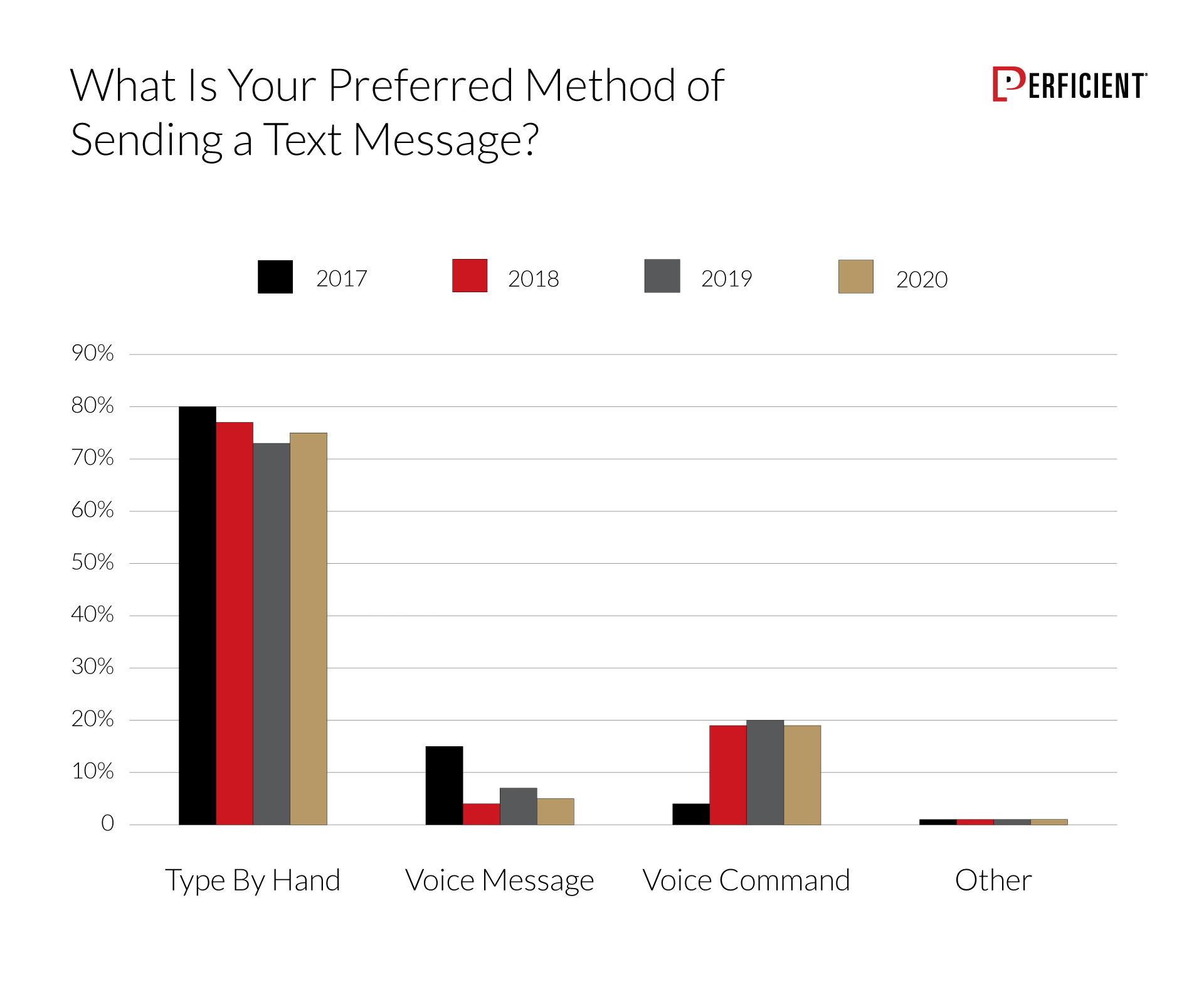 You can see that typing by hand dominates this question, with 75% of respondents choosing this answer, while using voice to enter in your text is used by 19% of people. Sending a text as a recorded voice message is only preferred by 5% of users (prior years have ranged from 4% to 7%).

Next up, we asked people about the quality of speech recognition, with the following question: “How well do your built-in personal assistants on your phone, such as Google Assistant, Cortana, and Siri, understand you?” Here is what we got: 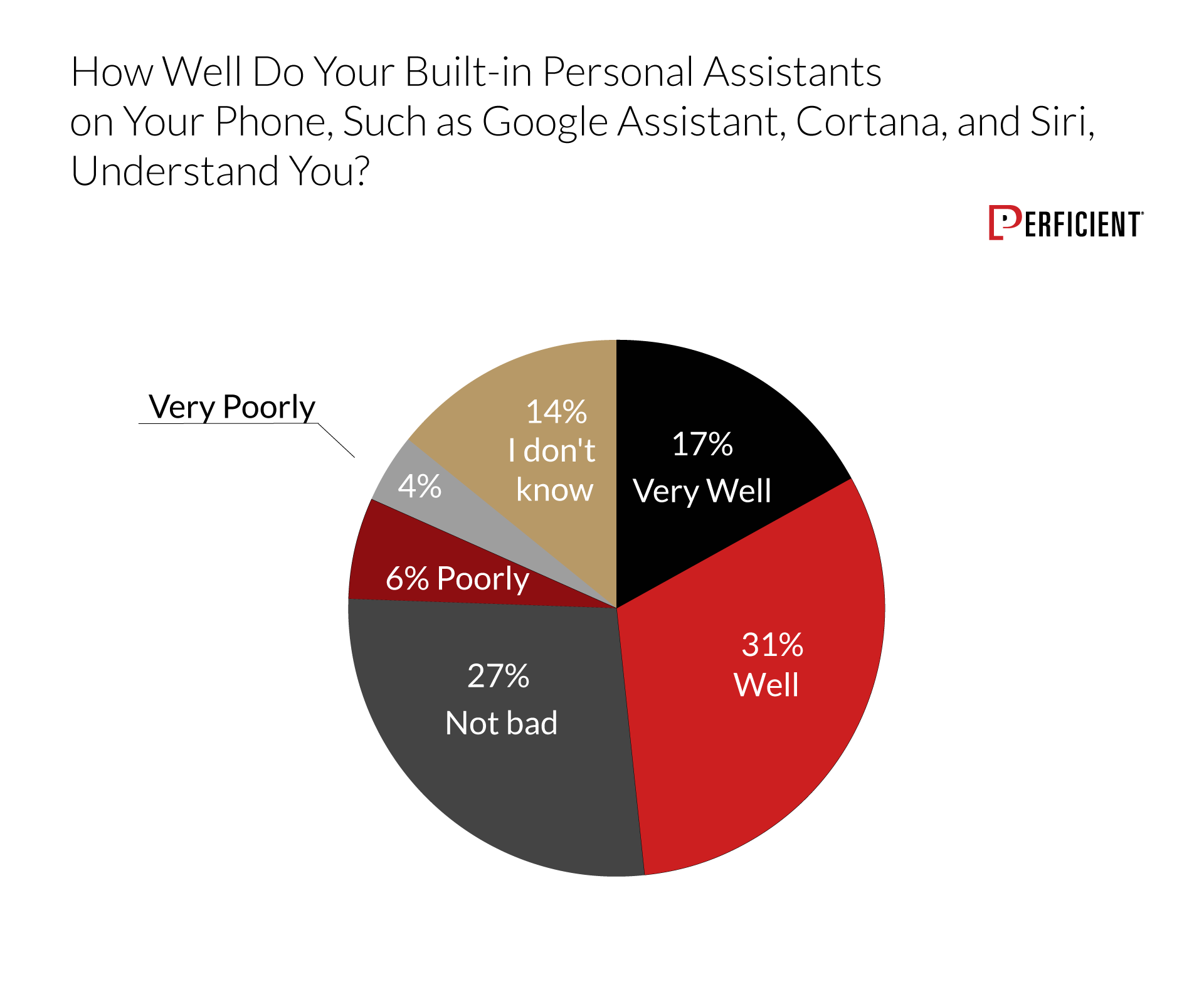 The responses “Very Well” and “Well” came in at 48% combined, and when you include “Not Bad,” the combined total goes up to 75%.

One reason people may hold back from using voice more is their reluctance to bother others. We decided to explore just how real that fear is and asked, “Do you agree with these below statements? I feel annoyed when I hear someone use voice commands on their phone in a public setting.” Here are the results: 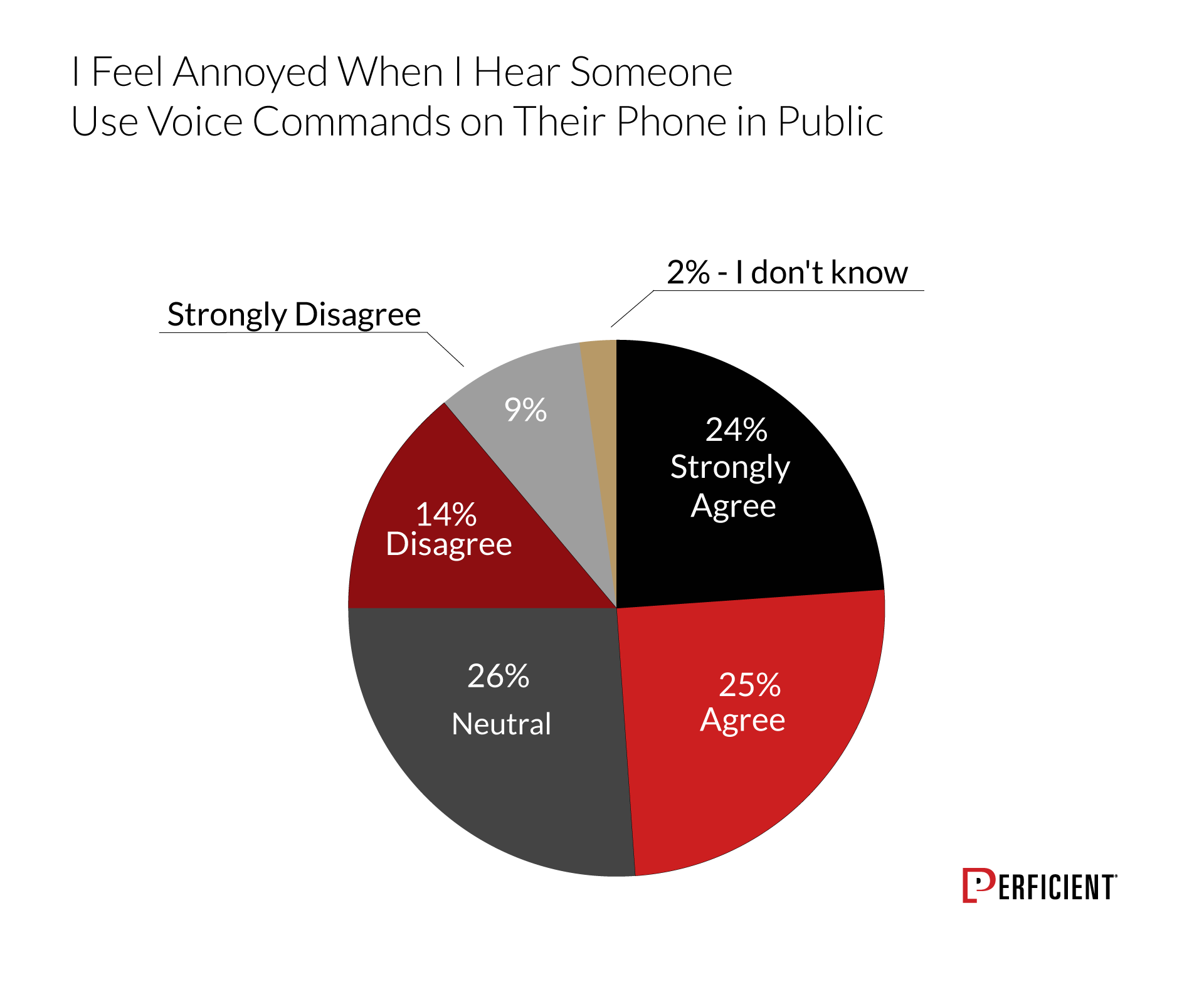 Among respondents, 49% chose “Agree” or “Strongly Agree” and only 23% selected “Disagree” or “Strongly Disagree” so a stigma still remains. This is in spite of the data we will present later in this report that suggests people are becoming more comfortable using voice with their devices in front of others. 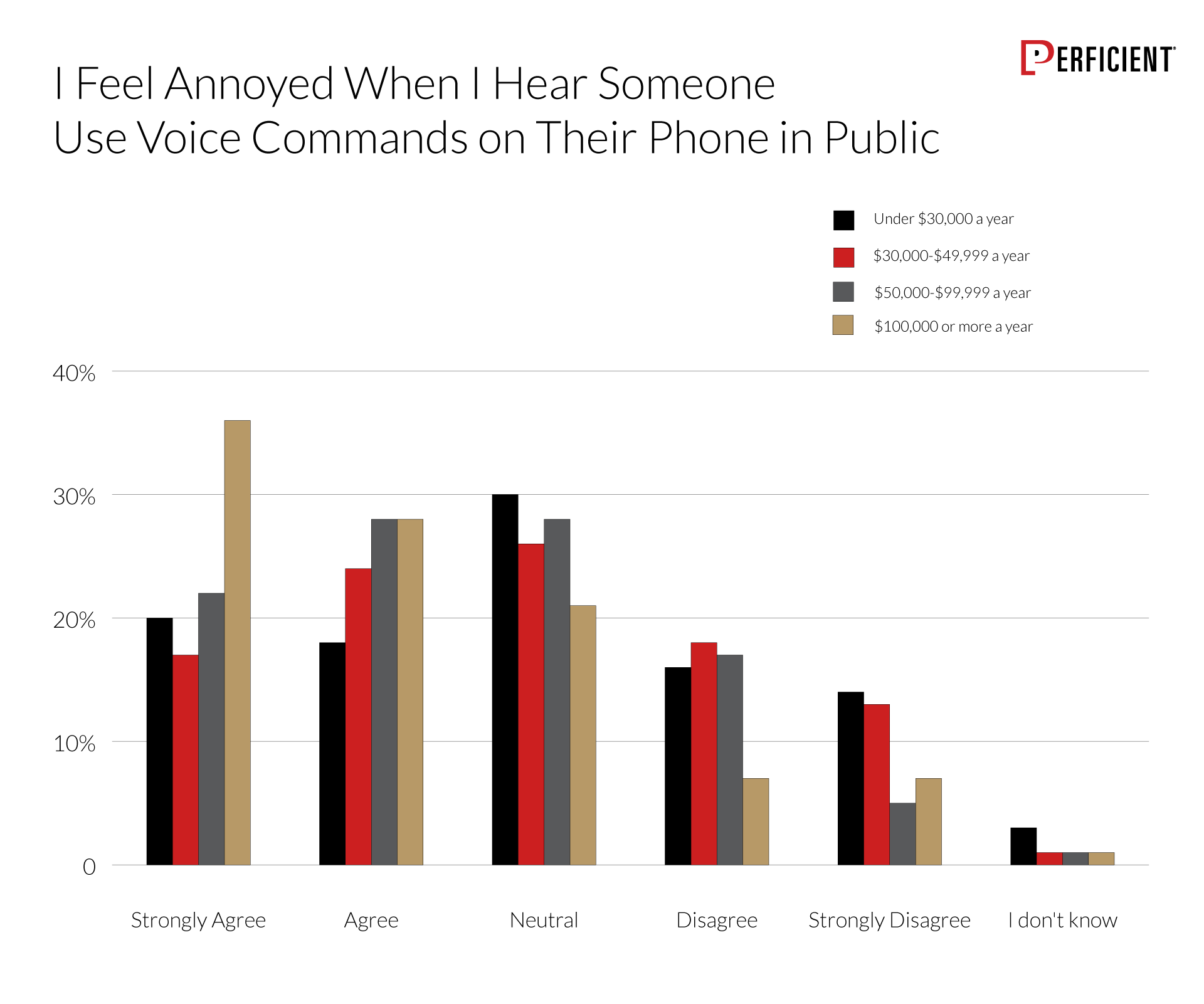 For the last question in this section of our study, we asked: “What Features Would You Like Your Personal Assistant to Offer in the Future?” Here are the results: 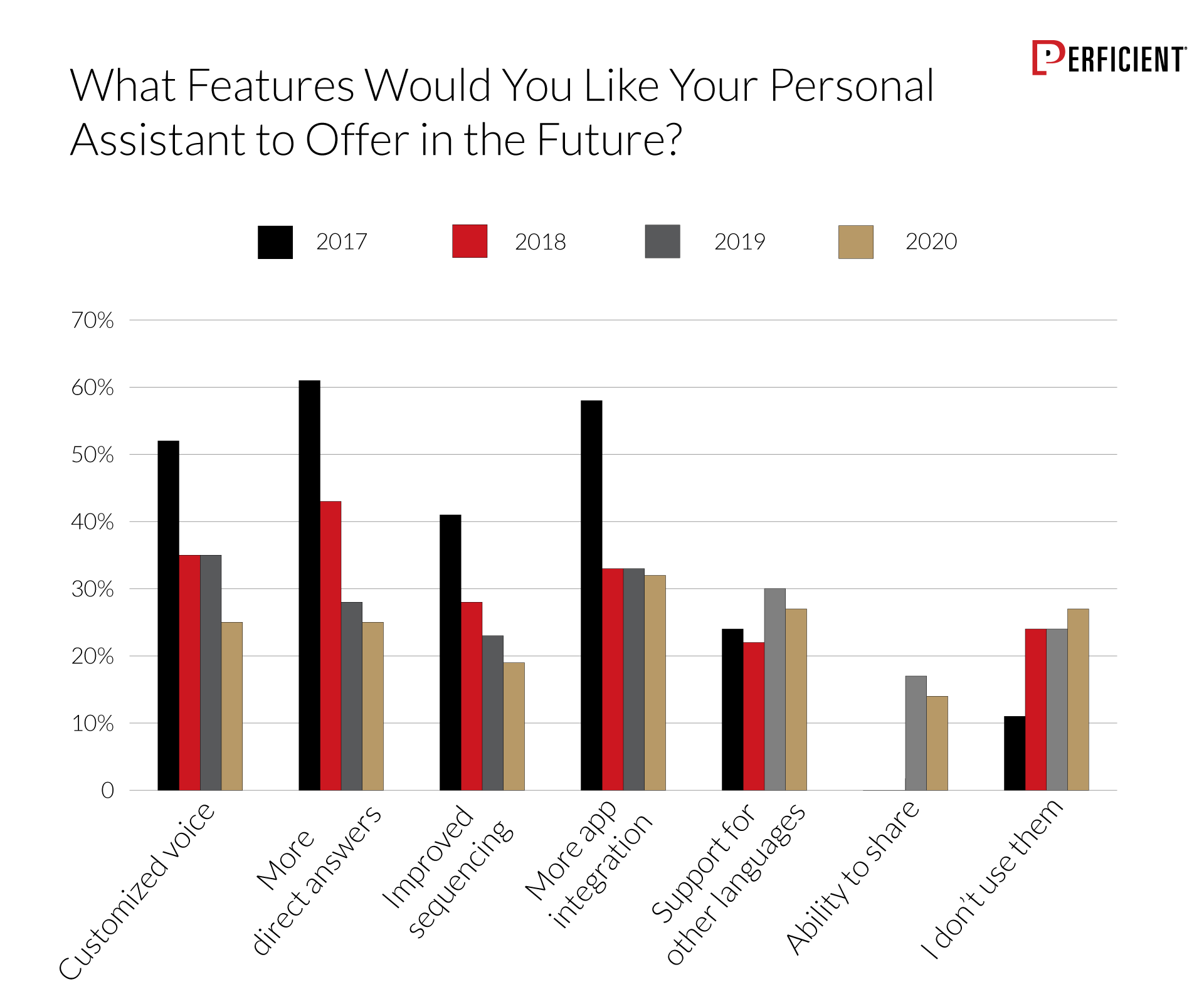 The top response was “more app integration” at 32%, with “support for other languages” coming in at 27%.

Fewer than 20% of respondents use a Smart Speaker to search for information more than five times per week. This suggests that Smart Speakers are not used as a substitute for traditional search.

In What Environments Do People Use Voice?

This next set of questions is intended to break down how various public and private situations impact people’s willingness to use voice commands. This data will tell us what the general trend is for voice usage over time.

During the past three surveys, we saw users getting more and more comfortable with using voice commands with their devices. This year, however, that comfort appears to have stagnated.

Here’s a look across all survey participants: 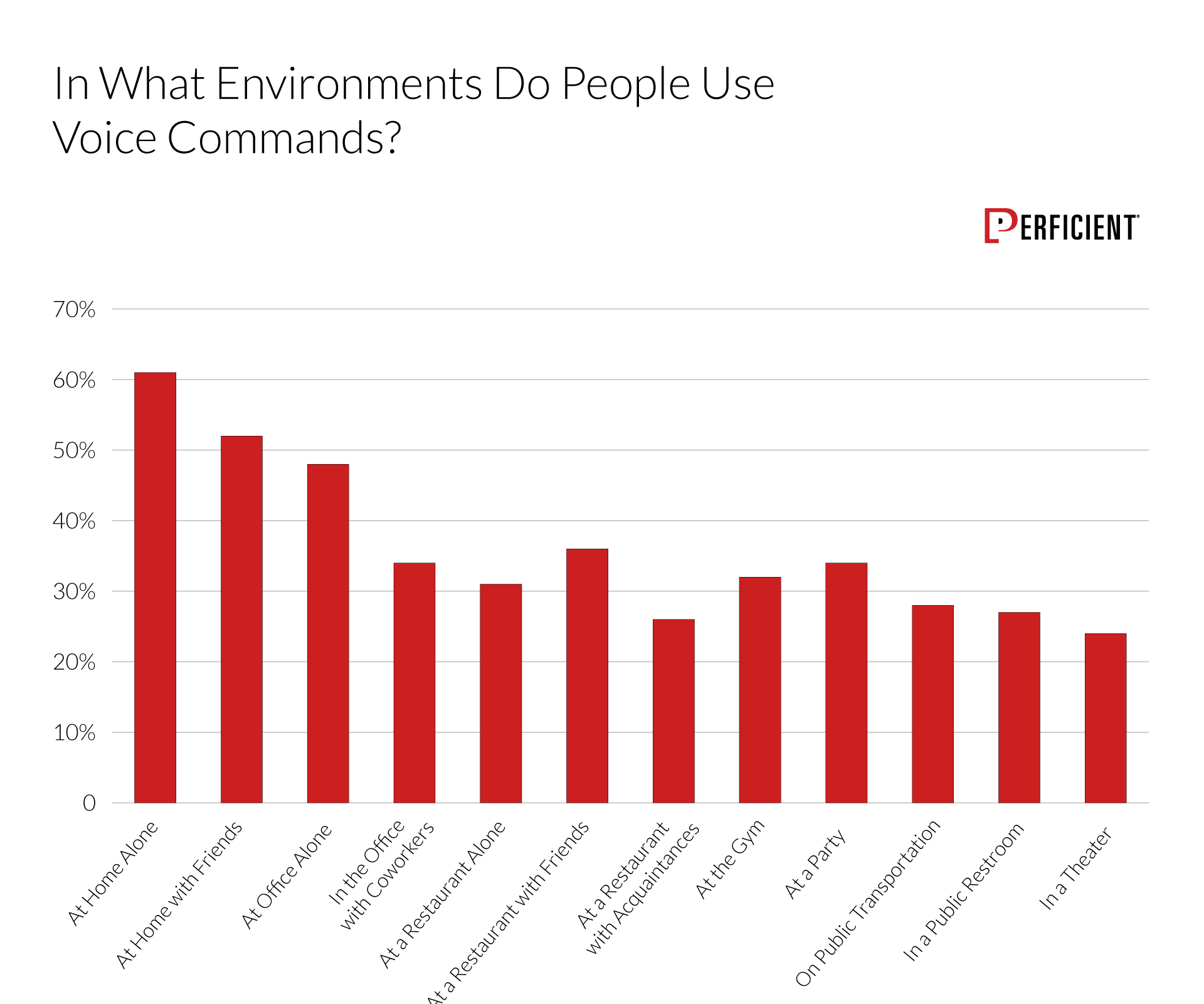 Note that the prevalence of speaking to devices “In a Public Restroom” (27.1%) and “In a Theater” (23.5%) seem stunningly high. How did these numbers change from last year? Let’s take a closer look. 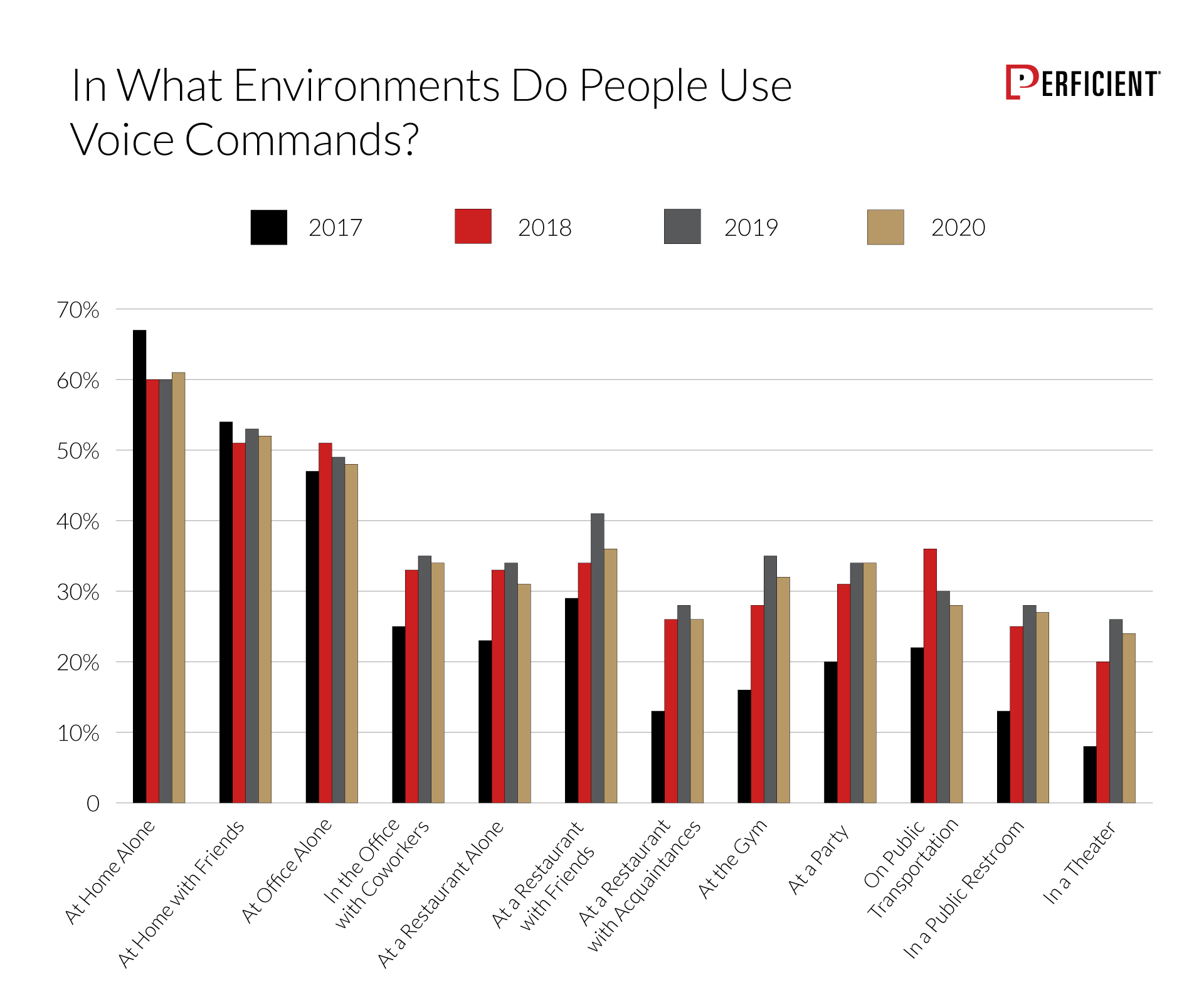 For the most part, these drops were small. The largest drop was “At a Restaurant with Friends,” which dropped from 41.2% to 36.2%. In aggregate though, what we see is almost no change in the overall willingness to use voice with devices.

We also measured how men and women differ with regard to using voice commands. As the prior three year’s surveys showed, we found that men are far more likely to use voice with their devices. 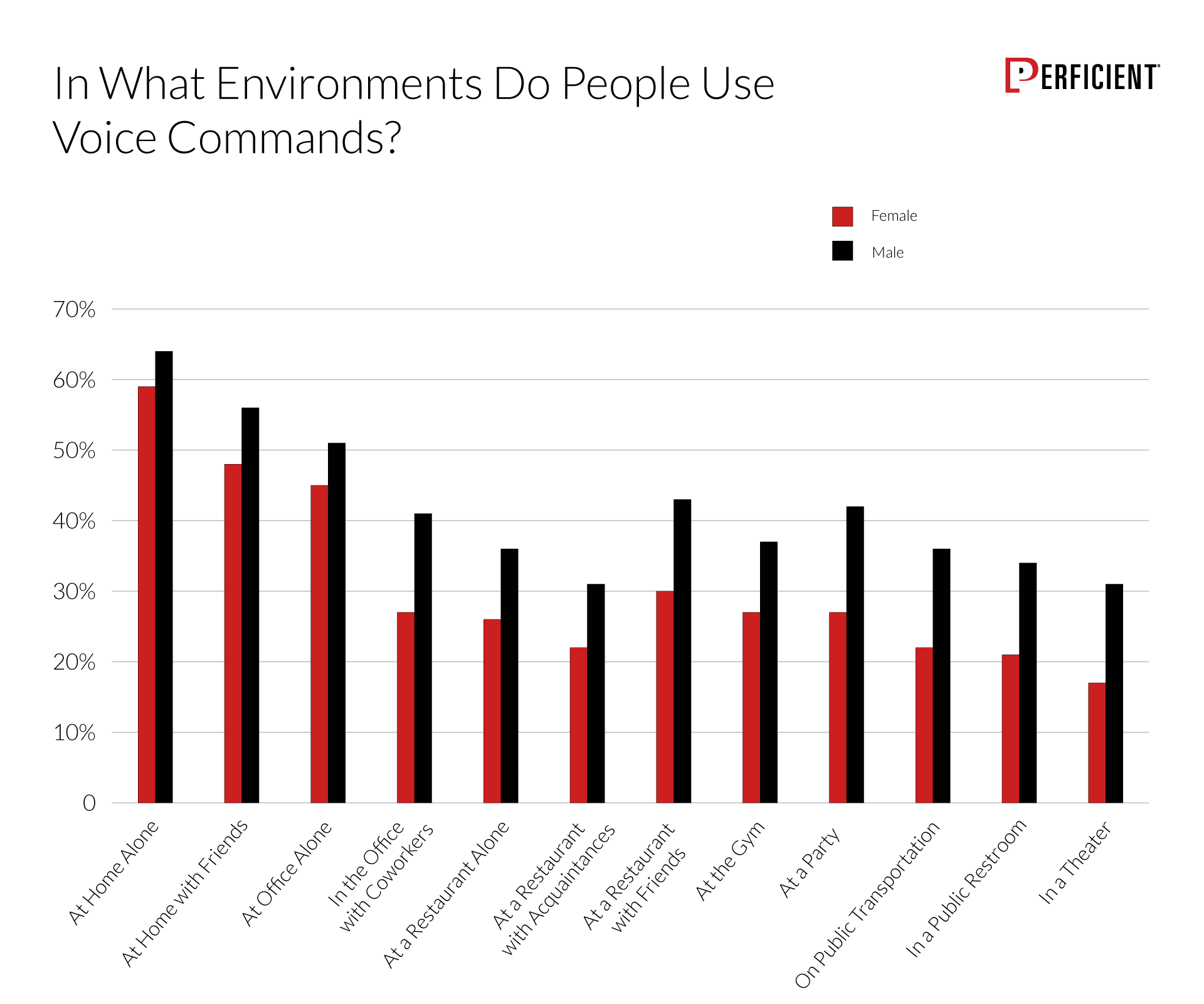 This indicates the gender gap has grown. In our 2019 study, we saw that men were 1.59 times more likely to use voice commands with their devices, and this year they’re 1.72 times more likely to do so. Further, this gap is more evident when it comes to using voice commands with devices in public. For the all-important “In a Public Restroom” stat, the gap is 36.7% (male) to 19% (female).

Next up, let’s examine how age influences the level of usage. Here’s what we saw: 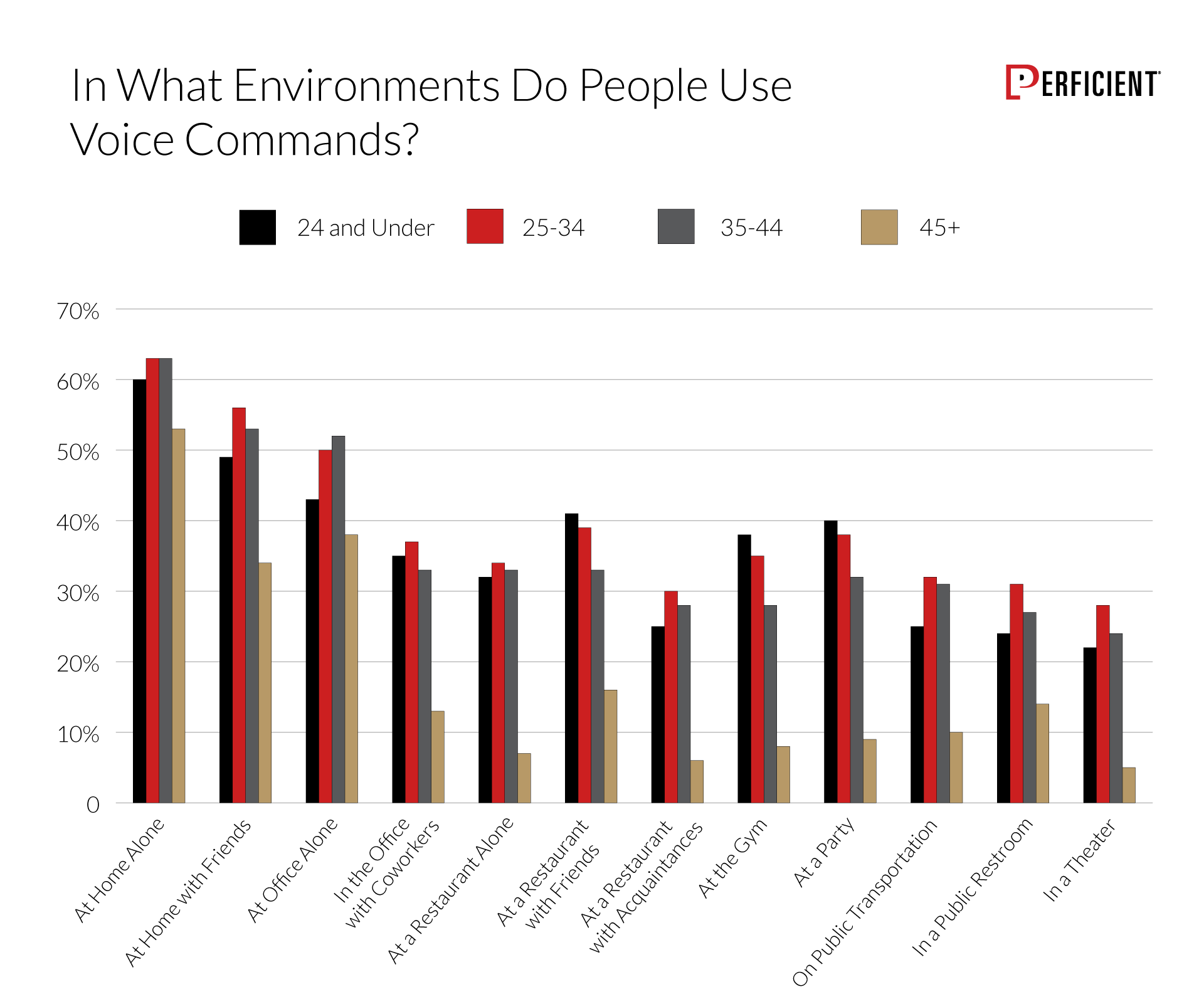 For the third year in a row, the 25-34 age group was the most likely to use voice commands with their Smartphone, and they were 9% more likely to be comfortable using voice with their device than the next closest age category (24 and under).

Marital status also seems to be a factor. Here’s a look at the data: 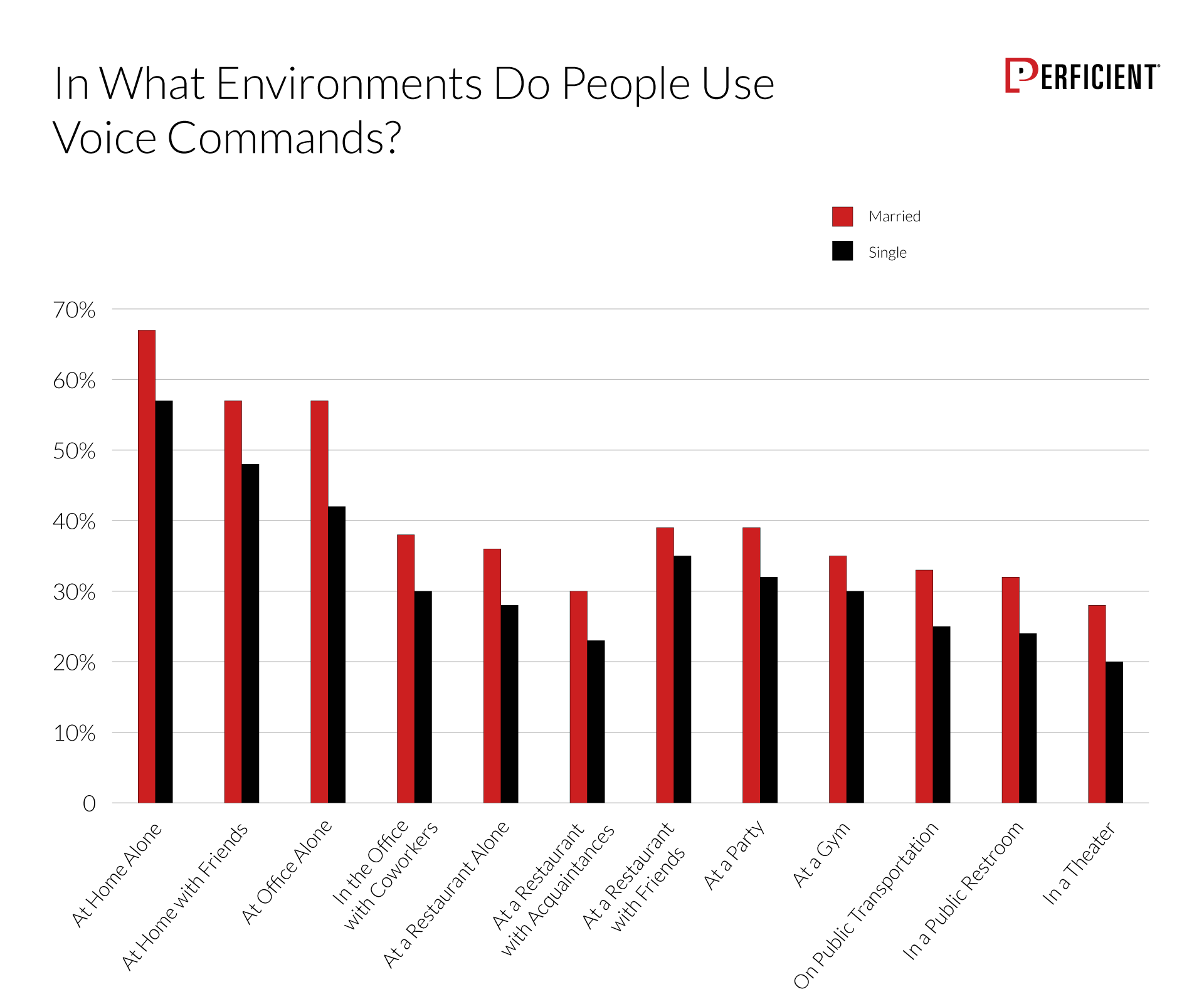 For the fourth year in a row, we captured income levels of the participants. Here’s what we got: 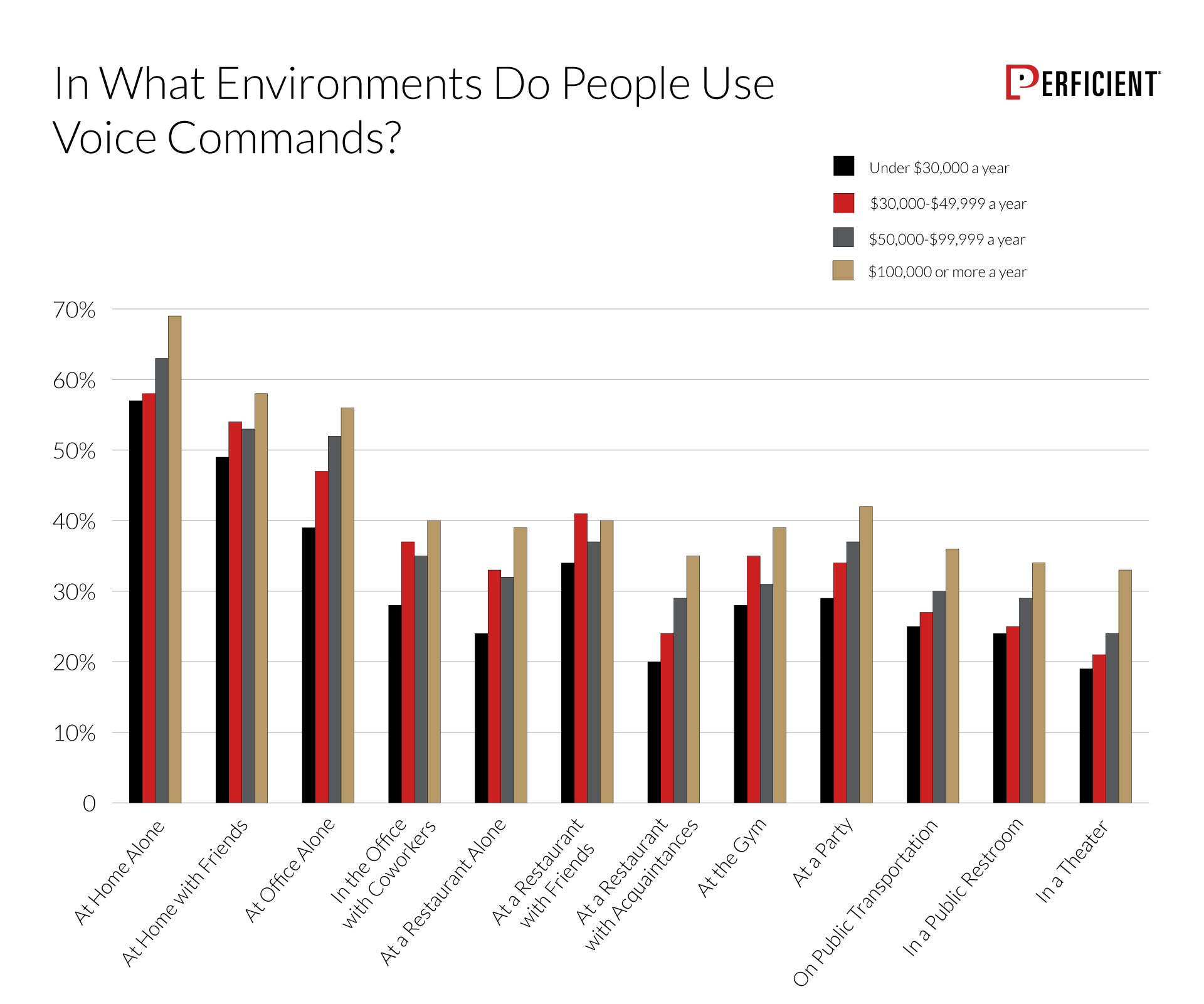 Also for the fourth year in a row, we captured information on the education level of participants. 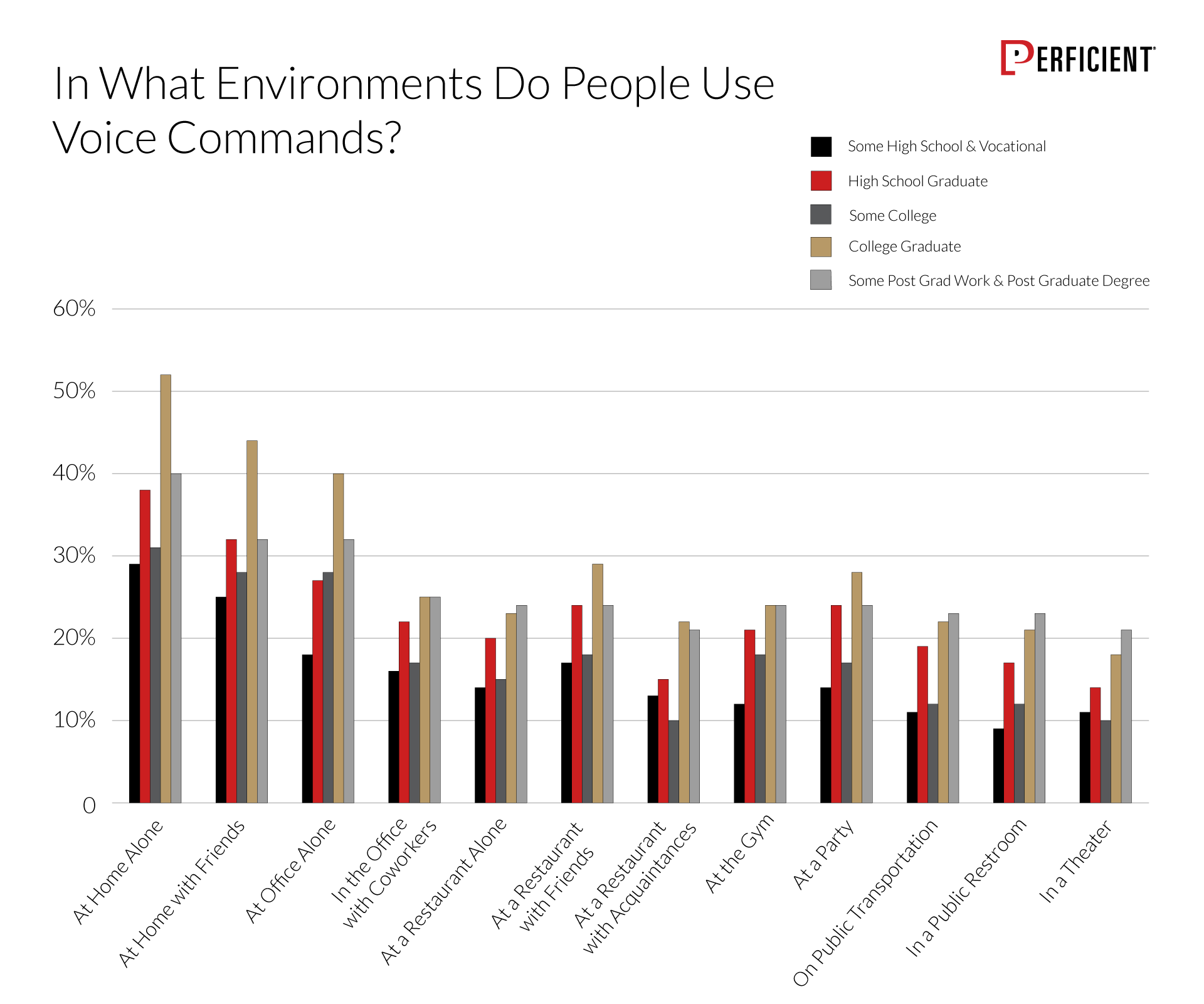 It looks like some postgraduate work, combined with those who have a postgraduate degree, are the heaviest users. In fact, voice usage seems to scale with education level. 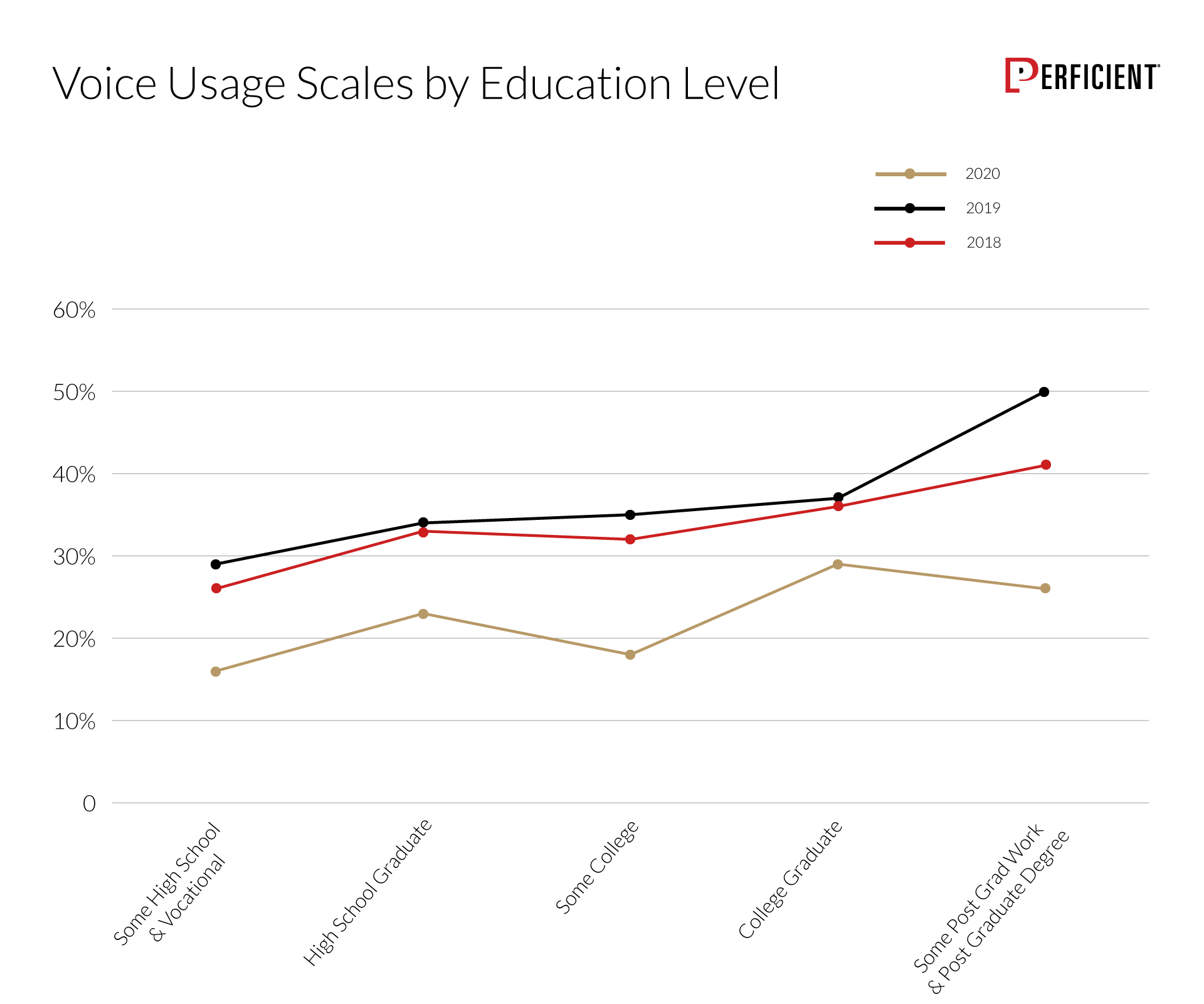 As you can see, in all three years, comfort with using voice commands goes up as education level rises. However, as with our other data, voice usage levels appear to be flat, and even slightly down for the higher education segments in 2020 vs. 2019.

More than 40% of participants said that incorrect answers from a device would cause them to use it less.

That was a lot of data to read (imagine how much work it was to process it!), but it’s important for all digital marketers to understand what role voice as a form of input may play in their overall strategy.

The voice revolution is not a game changer just yet, but for many organizations there are still opportunities to leverage voice.

What will ultimately drive massive adoption of voice as an input medium? Here are some of the trends driving us steadily (albeit slowly) toward a voice-first world: 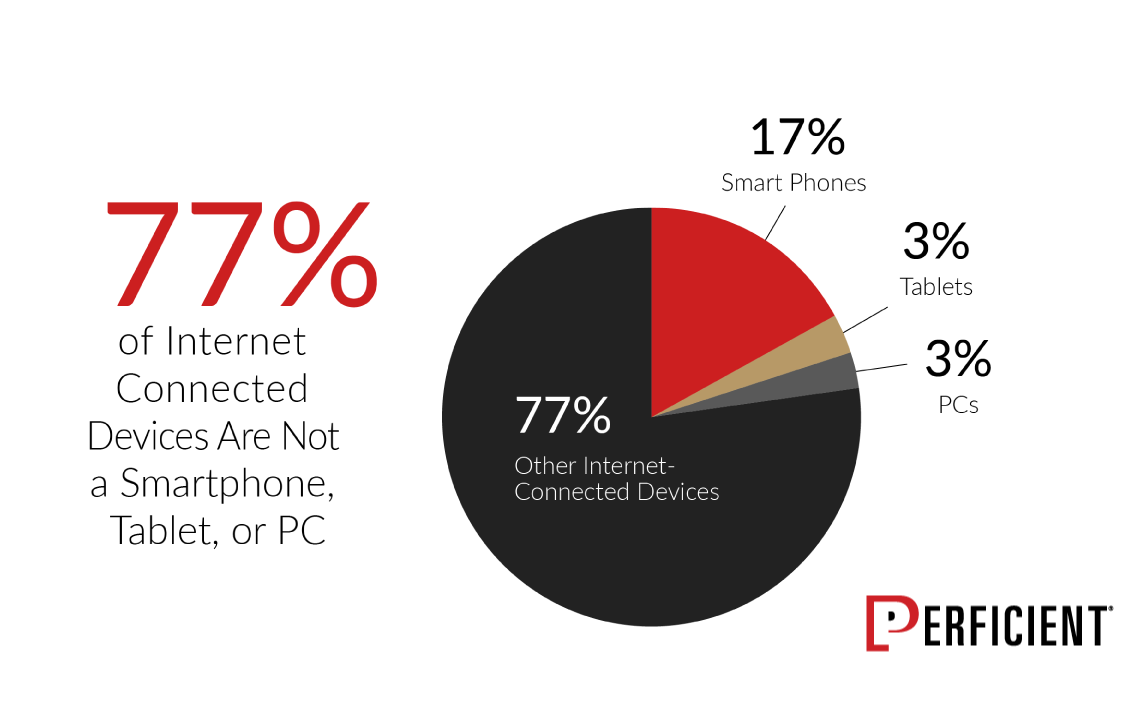 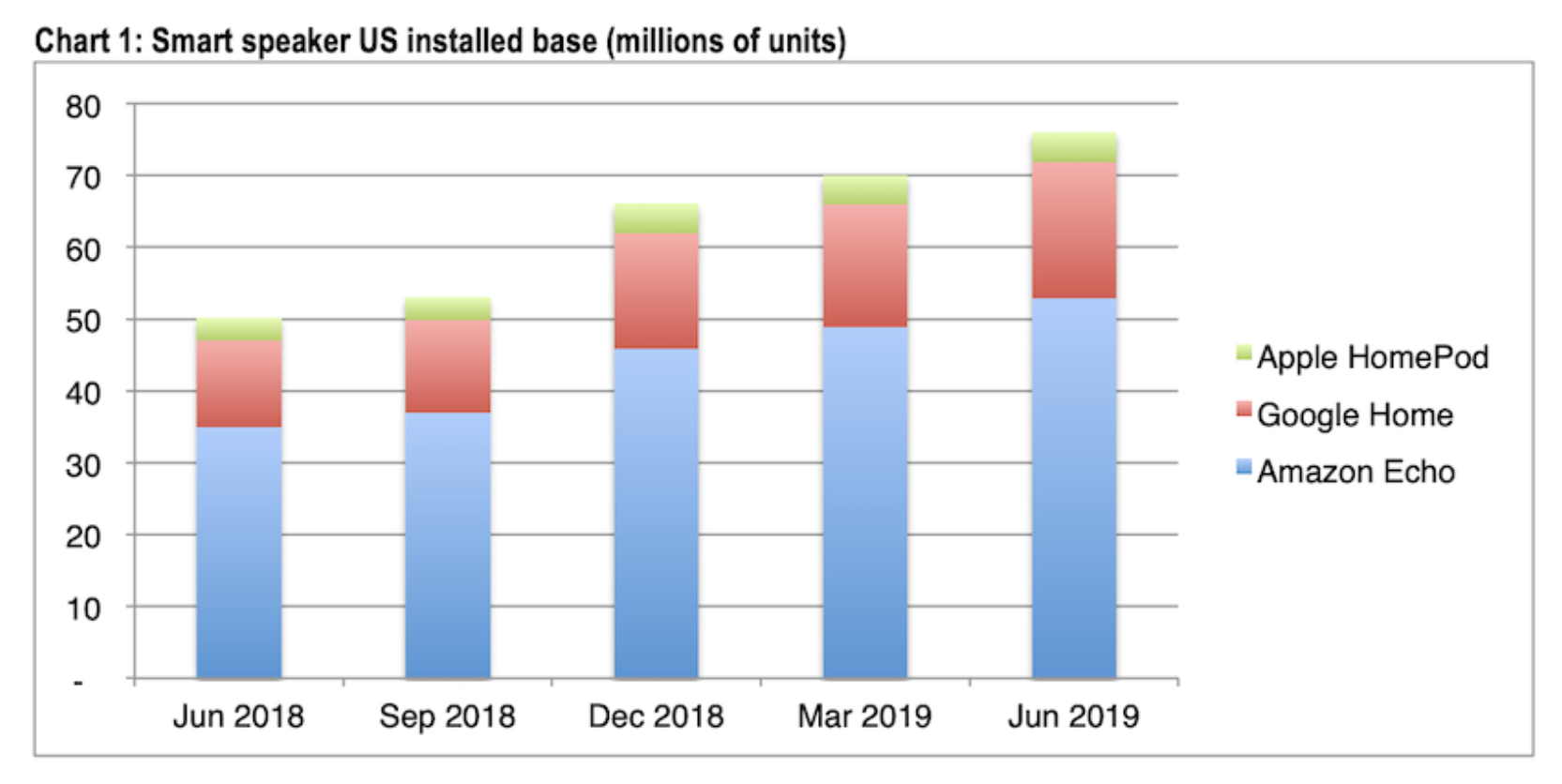 What is holding up the growth of voice as a form of input from increasing even faster? There are three key factors holding it back,

However, as our data above showed, users find failures by their device to recognize what they asked for as very frustrating. Our survey further indicated that these types of failures lessen usage.

This last step is really the most critical factor holding voice back. Large market disruptions only happen when the scope of the benefit is massive. Making something 10% easier to do but requiring people to learn a whole new modality AND challenge social norms in the process (such as speaking to a device in public) is a big ask for little benefit.

Eventually, we’ll get to a point where voice will enable scenarios such as this:

Hey Google, I want a pair of basketball sneakers. Size 10 and a half, wide foot, high top, and let’s make the color black. Oh yes, forgot to say, please get those via my smile.amazon.com account.

Hang on a second. Honey, can you get the door? The delivery man is here!

Ah, Google, sorry about that. Let’s see, where was I?

Oh, yes, make them Air Jordans. Bill it to my usual credit card and ship them to my home address. Can you confirm the price for me?

<Google comes back with the price>

That sounds great. Thanks, Google!

You can reimagine that conversation with the user stating their requirements in a completely different order or wanting to go through a discovery session to decide what it is they want.

The key, however, is the device letting the human think and speak like a human. Once we get there, this whole voice thing will become the predominant mode for input. We’re likely five to ten years away from getting there. However, many businesses are seeing great success building their own personal assistant apps (aka Alexa Skills or Actions on Google apps) and developing a great deal of positive attention and visibility for their organizations.